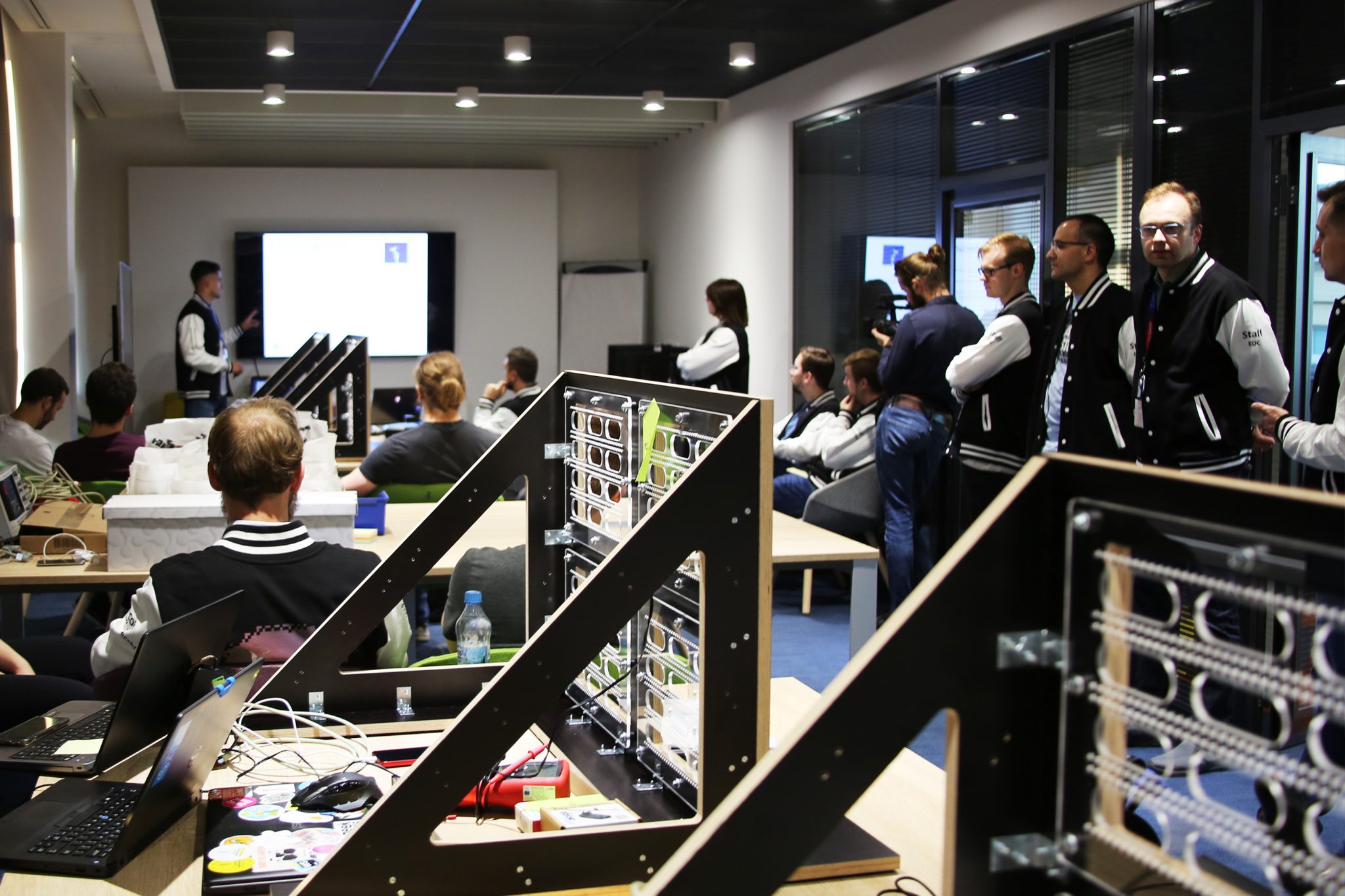 Last Friday, during the 9th Night at the Institute of Aviation we held the programming competition – EDC Hackathon 2018 – Flight Simulator. 16 programmers (4 teams) were chosen to take part in our unique avionics adventure. The task was to make the fully functional and responsive cockpit to be used with the simulator of Cessna 172SP.

The competition lasted 24 hours. During this time the participants were assembling and programming the cockpit. “It was refreshing to see teams organizing themselves and planning ahead, before rushing to do the actual work. Specialized, but diverse skills among team members were also beneficial and allowed to make significant progress during the event; in addition, the best teams surprised us with clean and consistent architectural choices in their solutions.” – said Maciej Sobczak, technical coordinator of the Hackathon task.

When the clock stopped, the jury consisted of EDC experts made the difficult decision about the winners, giving each team the points for both – realisation of the task and for things such as fair-play, technical proficiency and the ability to perform the task with minimal number of hints. Marcin Szafrański, the task inventor explained us why each place went to each team: “After summing up all points the results were clear. First prize went to the AGH Aviator team. They prepared a comprehensive cockpit solution that included flight display as well as avionics panels and variety of switches, handles and lights. Despite their display suffered from some performance issues, they had enough advance over the second team – Flay Runway Society. This team developed a professional display solution that worked very smoothly, for which they gained some extra points from jury. However, this team had failed to integrate hardware necessary to accomplish remaining parts of the cockpit and ended up just with display and ignition switch. Third place was obtained by ZiomyZiomeczki. We appreciated their will to work hard until the very end of Hacakthon and the fact that they were the only team, who manged to apply IO expander solution to Raspberry Pi. The 4th team, ZSS/EPSC invented a working solution for handling OLED displays and discrete pins, but unfortunately failed to integrate it with the Simulator”. – said Marcin.

All participants did their best when resolving the task. They were surprised with its complexity and they appreciated the vast variety of solutions they could have implemented. “All the hackathonists had really good time at our event. I talked with some of them and they were all tired, but also very satisfied with taking part in the event.” – said Radek Szymański, Hackathon organizer.

After obtaining the positive feedback, we asked Paweł Zakrzewski, Senior Director, Avionics & Digital Solutions about his plans for next year. “For sure there will be another edition of EDC Hackathon. The crossbar is set higher and higher, so we have to think hard about the challenging and interesting task for the next year’s competition. But for sure we will organize something to surprise the future participants”. – promised Paweł.

We keep him at his word! Stay tuned for the detail of the 2019 edition!