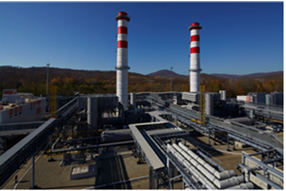 Dzhubginskaya TPP site was built to provide power for the 2014 Winter Olympic and Paralympic Games in Sochi. It is the first plant with LMS100 PB with DLE 2.0. Its launch improved the reliability of power supply to the Black Sea coastal area of Kuban, including Greater Sochi. The use of LMS100 DLE 2.0 technology allows this site to be one of the most advanced and efficient power stations in its class. It meets the environmental requirements of the International Olympic Committee and has a near-zero environmental footprint.

Being on site, our engineers faced several technical challenges related with units operation. They have performed troubleshooting and worked on solutions to get the units available for commercial operation. GE engineers presence on site allowed to build bridges between Customer and GE teams. This way GE could answer customer needs in a more effective and efficient way.

Both units were successfully tested, achieving the power and heat rate guaranteed by GE. The Aero team will keep supporting the site through the Sochi 2014 Winter Olympics contributing to the success of these great events.