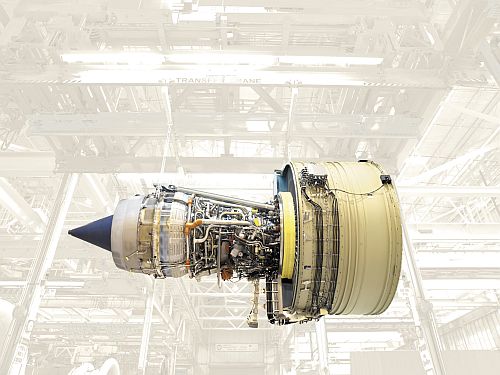 Generations of farmers have looked at the humble Camelina plant and saw weed. Mike Epstein, who leads alternative fuels development at GE Aviation, sees jet fuel. “It’s an amazing story,” Epstein says. “You just have to chemically modify it a little bit. Once you’ve done that, you’ve got something that looks very close to kerosene.”

Thanks to Epstein and his team, GE jet engines now burn biofuel blends from plants like Jatropha, a toxic desert shrub, wood chips, and algae. A GE-powered Embraer jet will take off for a test flight during Rio+20, the U.N. sustainable development conference held in Brazil this month. “We chip at the problem a bit at a time,” Epstein says.

In 2008, the team scored a hit when a Virgin Atlantic jumbo jet powered by four GE CF6 engines burning biodiesel flew from London to Amsterdam. “The energy density was still not good, but it was a fantastic first step,” Epstein says. “There were a lot of critics who said that we’d never fly with biofuel and this flight demonstrated that we could. It evolved from here.”

Just two years later, on Earth Day 2010, a NAVY F/A-18 fighter jet dubbed “Green Hornet” flew at 1.7 times the speed of sound with tanks filled with a half-and-half mix of Camelina fuel and kerosene. The Green Hornet was powered by two F414 GE engines manufactured by workers in Lynn, Massachusetts.