Skip to content
Home>Posts>EDC center is on the rise.

EDC center is on the rise. 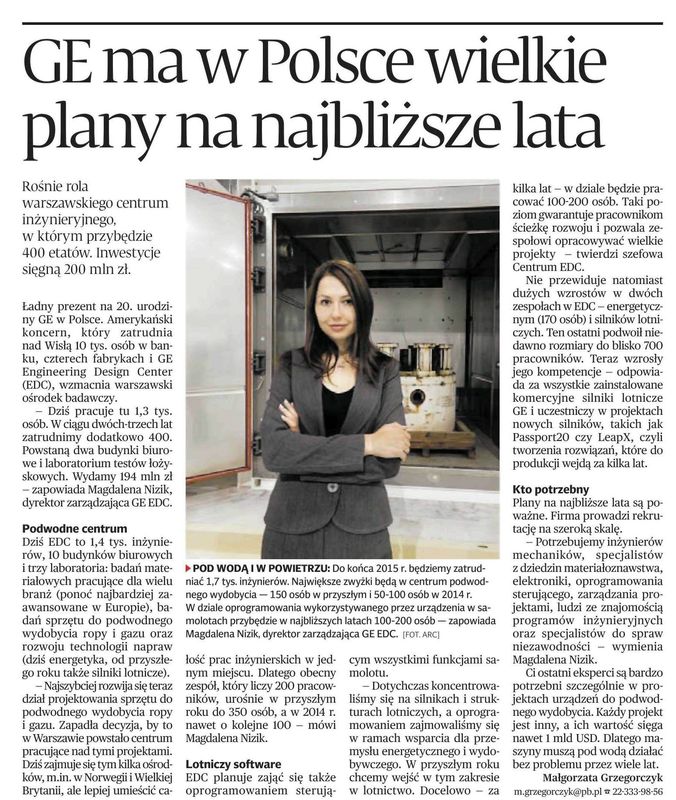 GE has great plans for the years to come in Poland, Poland: Puls Biznesu, 03rd October, 2012

The role of the Warsaw engineering centre, which is to offer 400 jobs, is on the rise. Investment will reach 200 mln zł.

It is a nice 20th birthday present for GE in Poland. The American concern employing 10 thousand people upon Vistula river in a bank, four factories and GE Engineering Design Center (EDC), strengthens the Warsaw research centre.

“Currently we have 1.3 thousand employees. Within two-three years we will employ 400 more.

Today EDC is constituted by 1.4 thousand engineers, 10 office buildings and three laboratories: material testing operating for multiple industries (apparently the most advanced in Europe), testing of equipment for underwater oil and gas excavation and the development of repairs technology (currently energy, from next year also aero engines).

“Nowadays the fastest development is the domain of the department of development of underwater oil and gas excavation equipment. A decision to open a centre developing those projects in Warsaw has been taken. Nowadays several centres are occupied with this aspect, some of them are located in Norway and Great Britain, however, it is better to concentrate all of the engineering works in one place. Therefore, the current team, in the number of 200 employees, will grow up to 350 employees next year and in 2014 even by further 100” – says Magdalena Nizik.

EDC plans to be engaged in software controlling all aircraft functions. “So far we have focused on engines and aviation structures and our involvement in software was a part of support for energy and mining industry. Next year we want to enter aviation in this scope. A target – in a few years time – is employment in that department in the range of 100-200 people. Such level guarantees the employees a development path and allows the team to develop large projects” – claims the head of the EDC Centre

However, she does not expect high increases in two teams at EDC – energy (170 people) and aero engines. The latter one has recently doubled in size up to nearly 700 employees. Now its competences have extended – it is liable for all GE commercial aero engines installed and participates in new engine projects, such as Passport20 or LeapX, which means creation of solutions which will be produced in a few years.

The plans for the near future are serious. The company is running high scale recruitment.

“We are in need for mechanics engineers, specialists in materials science, electronics, controlling software, project management, people with the knowledge of engineering programs and reliability specialists” – lists Magdalena Nizik.

The latter experts are in high demand, particularly in the projects concerning 7equipment for underwater excavation. Each project is different and their value reaches even up to 1billion USD. Hence the operation of machines under water must be problems free over many years.

UNDER THE WATER AND IN THE AIR: Until the end of 2015 we will have employed 1.7 thousand engineers. The largest increases will apply to sub-sea centre – 150 people next year and 50-100 people in 2014. In the airplanes equipment software section 100-200 people will be employed in the coming years – states Magdalena Nizik