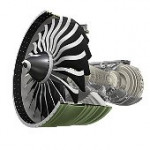 CFM International has booked orders and commitments for nearly 2,660 LEAP engines to power Airbus A320neo, Boeing 737 MAX, and COMAC C919 aircraft at a value of more than $29 billion U.S. at list price.

In August 2011, Boeing announced that the LEAP-1B would be the sole powerplant on its new, re-engined 737 MAX airplane. In addition to a 100-aircraft order from American Airlines, Boeing has received commitments for approximately 600 additional aircraft, for a total of 1,400 engines.

The LEAP-1C is the exclusive powerplant for the new 150-passenger COMAC C919. COMAC has received commitments for 165 aircraft, including recently announced orders for 45 aircraft from ICBC Leasing and 20 aircraft from Sichuan Airlines.

The foundation of the LEAP engine is heavily rooted in advanced aerodynamics, environmental, and materials technology development programs. It will provide up to 15 percent better fuel consumption and an equivalent reduction in CO2 emissions compared to today’s best CFM engine, along with a 50 percent reduction in oxides of nitrogen emissions, and up to a 15 decibel reduction in noise. All this technology brings with it CFM’s legendary reliability and low maintenance costs.

LEAP engines are a product of CFM International (CFM), a 50/50 joint company between Snecma (Safran group) and GE and the world’s leading supplier of commercial aircraft engines.

This is a GE Aviation news release – http://www.geaviation.com/aboutgeae/presscenter/cfm56/leap-x/leap_20111115b.html