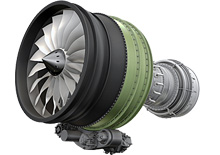 GE’s Passport engine is the result of a joint venture between GE, IHI of Japan and TechSpace Aero of Belgium. The Passport engine for the Bombardier* Global* 7000* and Global 8000* business jets will produce 16,500 pounds of thrust and will incorporate advanced technologies and materials to provide: 8% lower specific fuel consumption than engines in its class; margin to CAEP/6 emissions and to Stage 4 noise regulations; and world-class reliability and support.

Among the new engine technologies are a composite fan case to reduce weight; a unique 52-inch front fan blisk for lower cabin noise and vibration, technologies from GE’s eCore suite to lower emissions and improve fuel efficiency, and a unique super finish on the high pressure compressor blades and blisks for enhanced fuel efficiency.

The Passport’s integrated propulsion system from Nexcelle, a joint venture between GE and Safran, will feature a slim-line nacelle with outward opening cowl to reduce weight and drag while allowing for easy maintenance access and high dispatch availability.

GE Aviation, an operating unit of GE (NYSE: GE), is a world-leading provider of jet, turboprop and turboshaft engines, components and integrated systems for commercial, military, business and general aviation aircraft. GE Aviation has a global service network to support these offerings. For more information, visit us at www.ge.com/aviation. Follow GE Aviation on Twitter at http://twitter.com/GEAviation and YouTube at http://www.youtube.com/user/GEAviation.