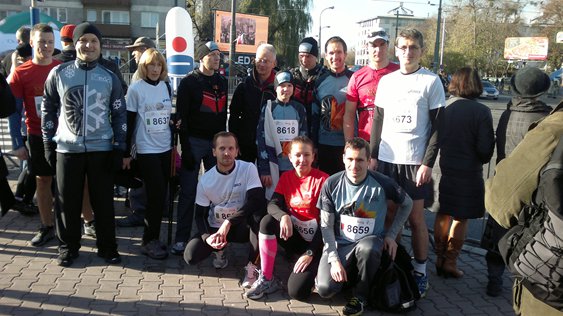 The EDC Runners Team took to the beautiful streets of radiant Warsaw on a magnificent November 11th, Poland’s Independence Day.  The unseasonably bright, yet delightful, effulgent sun, showered runners and spectators alike with a glimmering aura that made the city – buildings, monuments, and all that is contained in the lively mass that we call the Capital – come to life to glorify this celebration of life, love, freedom, and the human spirit. Fifty-six runners from the EDC ran as well.

The fastest runner from the EDC said:  “I have been doing a lot of sports before but honestly never been interested in running…  It was just a part of the game but not the game itself.  Some time ago I realized that this is probably one of the few safe sports I can still afford to make being in my age J (I played rugby for most of my life before). I started to run to work twice a week (4.5K one way) and 10K on weekends.  On Oct 11 I got an email from EDC-Runners team that they were going to participate in 10K Independence Run on Nov 11.  I like challenges so I signed up for this. My goal was to make 10K in 40 min (which I was able to do years ago).  On Nov 11 the weather was great, crowd cheering was loud and adrenaline was high so I was able to beat myself and made it in 38:25.  Best thing about running is that you do not need to make a big investment – literally you just need a pair of sneakers.  So stop groaning about not having time or damn weather – and as one of the commercials says – JUST DO IT.  See you on the track.”