EDC engineer became the vice-champion of the world in gliding 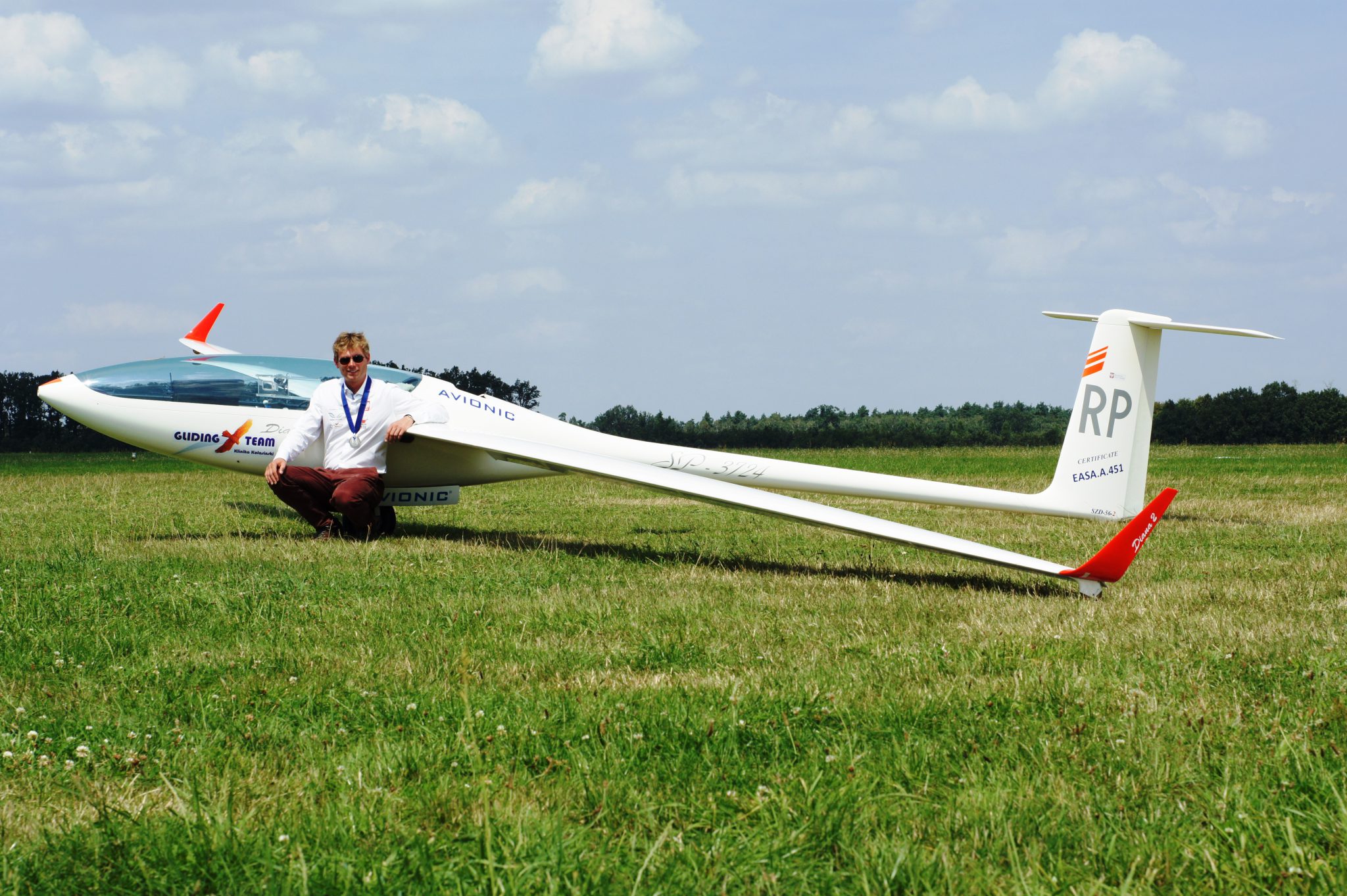 Łukasz Grabowski from GE Aviation won the 2nd place at the 35th FAI World Gliding Championships (WGC), in 15-meter class gliders. The competition was held in Ostrów Wielkopolski, from July 8th till 21st. We talked with Łukasz about his passion, success and gliding itself.

EDC: At first, congratulations! Please tell us, how you combine working full-time job with gliding on the highest world level?
ŁG: Gliding is the sport that you don’t have to spend 8 hours each day at the gym. I fly on weekends and have longer trainings from time to time during my days off. Fortunately, that’s enough to keep the form high enough to start in the top competitions.

EDC: At the 34th WGC you were 3rd, now – 2nd. What’s next?
ŁG: I will try my best to develop. I think I still have something to work on to be at the top of the tops. I see the fields to improve. We will see what the time will bring.

EDC: Gliding looks like a sport that requires versatile skills. What is important to be good at it?
ŁG: Purity of pilotage is vital, same as the ability to choose optimal route of the flight. Also some technical knowledge and well-recognition of meteo and terrain conditions is needed. What’s more, the resistance to stress plays a big role.

EDC: The WGC took 14 days, from which the weather let you compete for 7, from the early morning to the late evening. All the time you must be focused? That looks like very mentally tiring sport.
ŁG: It is in fact. My competition day lasts approximately 13 hours and after what I want to do the most is just to go to sleep. From the early morning till late afternoon I need to observe the weather, the terrain, watch out for other gliders that are next to me. Not mentioning choosing the best route. It’s quite tiring, the more that it lasts for a few days in a row.

EDC: The flight takes around 4-6 h hours. What do you do in the rest of the competition time?
ŁG: The preparation of the glider takes around 1,5 h. In that time I check everything, fill the wings with water (that makes the glider faster) and transport it to the runway. Later we meet at the briefing and prepare for the flight (meteo, tactics, etc.) – another 1,5 h. Around noon, all the gliders are towed to the air by planes. Then, as you said, the 4-6 h flying starts. And later we need to check and clean the glider, again meet with the team at debriefing… That takes time.

EDC: When you are in the air, what exactly is your task. What is the competition about?
ŁG: The gliding contest is a type of racing. Depending on the weather conditions, we start in two disciplines. Typically, in good conditions the task is to fly from point to point in the shortest possible time. In the days with worse weather we are given a specific time and areas, for example in 4 hours we need to fly the greatest distance “visiting” all  given areas. The routes are always defined such that the finish point is the airfield we take off from.

EDC: Sunny days are the best for gliding?
ŁG: Yes. Most people think that the wind is the most important parameter in gliding. And in fact, it doesn’t really matter if it’s windy or not, as long as we’re not flying above mountains. What is vital is the sun, and the characteristics of the air mass. When we glide, we are using the thermal updrafts, where the rising air is taking the glider up. When the sun is shining, there are more updrafts, so it’s possible to fly longer and further. Without them it’s hard to fly for a long time as the glider is just descending. And what happens then is that sometimes we need to land just in the middle of nowhere.

EDC: It happens often that that advanced gliders as you are, need to land not at the airport?
ŁG: From time to time. Especially during the competition, when we are all trying to complete the same planned route. In Ostrów one race was finished properly by only two participants. The rest didn’t make it, including me. I landed in the field, somewhere between some cabbage and broccoli. <laugh>

EDC: Wow! And you managed to get to the podium even with that – amazing!
ŁG: Thank you. In fact, the weather changed in the places where we needed to fly. That’s why this race finished that way. But as nearly all of us had problems, it was still possible to get to the highest positions.

EDC: Congratulations once again! And thank you for the interview.
ŁG: Thanks.

Gliding has been Łukasz’s passion since he was 16. After 4 years of practicing, in 2006, he started taking part in various gliding competitions. Now he is a member of the Polish national team, representing our country at different gliding events all around the world. But for this year’s medal, among his biggest achievements there are: bronze medal at the World Championships in Australia in 2017, Polish vice-championship in June 2016 and  2nd place at Junior World Gliding Championships in 2011, covering 960 km in one flight.